Robin Hemley has published fifteen books of fiction and nonfiction. His most recent books are the autofiction, Oblivion, An After-Autobiography (Gold Wake, 2022), The Art and Craft of Asian Stories: A Writer’s Guide and Anthology, co-authored with Xu Xi (Bloomsbury, 2021) and Borderline Citizen: Dispatches from the Outskirts of Nationhood (Nebraska, 2020, Penguin SE Asia, 2021). He has previously published four collections of short stories, and his stories have been widely anthologized. His widely-used writing text, Turning Life into Fiction, has sold over a hundred thousand copies and has been in print for 25 years. His work has been published and translated widely and he has received such awards as a Guggenheim Fellowship, a fellowship from the Rockefeller Foundation, three Pushcart Prizes in both nonfiction and fiction, The Nelson Algren Award for Fiction, The Independent Press Book Award for Memoir, among others. His short stories have been featured several times on NPR’s “Selected Shorts” and his essays and short stories have appeared in such journals as Creative Nonfiction, Conjunctions, Guernica, The Iowa Review, The New York Times, New York Magazine, Chicago Tribune, and many others. He is the Founder of the international nonfiction conference, NonfictioNOW and was the director of the Nonfiction Writing Program at The University of Iowa for nine years, inaugural director of The Writers’ Centre at Yale-NUS, Singapore, and is a graduate of The Iowa Writers’ Workshop. He is Inaugural Director of the Polk School of Communications at Long Island University-Brooklyn, Co-Director of the MFA in Creative Writing, Parsons Family Chair in Creative Writing, and University Professor. He has had artist residencies at The Bellagio Center at Lake Como, The Bogliasco Foundation, The Fine Arts Work Center in Provincetown, the MacDowell Colony, and others. He is co-editor with Leila Philip of Speculative Nonfiction and co-founder of Authors at Large with Xu Xi.

Sara Cahill Marron, native Virginian and Long Island resident, is the author of Reasons for the Long Tu’m (Broadstone Books, 2018), Nothing You Build Here, Belongs Here (Kelsay Books 2021), and Call Me Spes (MadHat Press 2022). She is the Associate Editor of Beltway Poetry Quarterly and publisher at Beltway Editions. Her work has been published widely in literary magazines and journals; a full list is available here. Sara also hosts virtual readings for Beltway Poetry Quarterly with her partner in poetry, Indran Amirthanayagam and teaches poetry in modern discourse programs for teens at the public library in Patchogue, NY. She is periodically available for editing projects and specializes in creative fiction and poetry. Please contact her at saracmarron@gmail.com to start a conversation.

​New York Writers Workshop @ Underland Gallery Reading Series, #2 -- Saturday, Oct 22, 2022
NYWW @ UG is a monthly reading series featuring some of the region's, the nation's, and the world's most significant writers, presenting their work and taking your questions in the charming space of Brooklyn's Underland Gallery, located in Bay Ridge at 457 77th Street. For our second reading in the series, we present:
​
Troy Jollimore is the author of four books and poetry and three books of philosophy, as well as numerous articles, essays, and reviews. His first collection of poetry, Tom Thomson in Purgatory, won the National Book Critics Circle award in 2006. His third, Syllabus of Errors, appeared on the New York Times’ list of best books of poetry published in 2015. His poems have appeared in publications including the New Yorker, Poetry Magazine, McSweeney’s, the New England Review, Tin House, and The Best American Poetry 2020. His essays have been published in venues including Conjunctions, the Kenyon Review, Zyzzyva, and the New York Times Book Review, and he is a frequen book reviewer for publications including the Chicago Tribune and the Washington Post. In 2013 he was awarded a Guggenheim Fellowship in poetry. He has also received fellowships from the Bread Loaf Writers’ Conference and the Stanford Humantiies Center in Palo Alto, California. He holds a Ph.D. in Philosophy from Princeton, he is currently a Professor in the Philosophy Department at California State University, Chico. His fourth book of poems, Earthly Delights, was published in 2021, and he is currently editing a collection of new scholarly articles on loyalty for Oxford University Press’s The Virtues series.

Arundhathi Subramaniam is the award-winning author of thirteen books of poetry and prose, including the recent poetry volume, Love Without a Story, and a book of essays on contemporary women on sacred journeys, Women Who Wear Only Themselves. Her other work includes the acclaimed sacred poetry anthology, Eating God and the bestelling biogrpahy of a mystic, Sadhguru: More Than a Life. A well-known prose writer on Indian spirituality, she has been a long-standing arts critic, anthologist, performing arts curator, and poetry editor. She is the recipient of numerous awards and fellowships, including the Sahitya Akadmi Award, the inaugural Khushwant Singh Prize, the Raza Award for Poetry, the Zee Women’s Award for Literature, the International Piero Bigongiari Prize in Italy, the Mystic Kalinga award, the Charles Wallace, Visiting Arts, and Homi Bhabha Fellowships, among others. She has written extensively on culture and spirituality, and has worked over the years as poetry editor, cultural curator, and critic.

Jee Leong Koh is the author of Steep Tea (Carcanet), named a Best Book of the Year by the UK’s Financial Times and a Finalist by Lambda Literary in the USA. His hybrid work of fiction, Snow at 5 PM: Translations of an insignificant Japanese poet won the Singapore Literature Prize in English fiction. He has also published Payday Loans (Poets Wear Prada Press and Math Paper Press); Equal to the Earth (Bench Press); Seven Studies for a Self Portrait (Bench Press); Connor & Seal (Sibling Rivalry), and The Pillow Book (Math Paper Press and Awai Books), both shortlisted for the Singapore Literature Prize. His work has been translated into Japanese, Chinese, Vietnamese, Malay, Russian, and Latvian. His second Carcanet collection, Inspector Inspector, was released in the UK in August 2022, and appears in the US in October 2022. Jee lives in New York City. He is the founder of the literary non-profit Singapore Unbound, which organizes the biennial Singapore Literature Festival in New York City and the monthly Second Saturdays Reading Series, and publishes original works of poetry, fiction, and creative nonfiction, artist interviews, and book reviews in its journal SUSPECT and its press, Gaudy Boy. Contact Jee at jeeleong.koh@gmail.com. 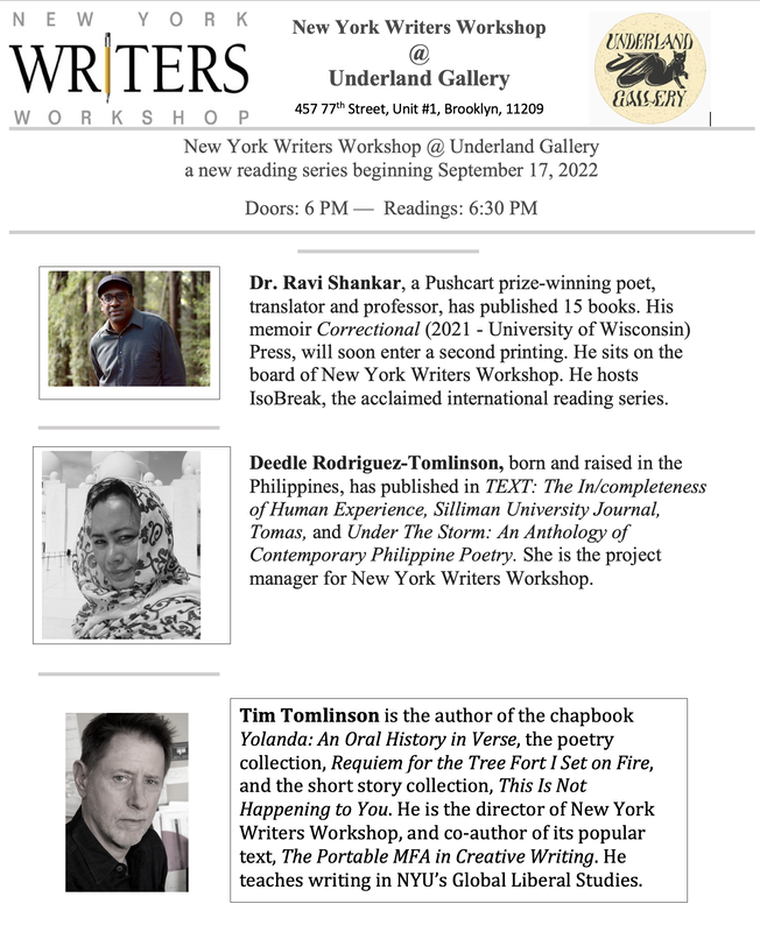